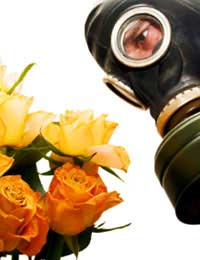 If you are a hay fever sufferer, especially one who has been struggling with the allergy for a long time, you are likely familiar with most of the mainstream hay fever therapies such as nose sprays or monitoring the pollen count. While modern hay fever therapies do work well for many people, those who find little or no relief due to aggressive hay fever symptoms will continue to be frustrated with their condition as they look ahead with hope to new hay fever treatments.

Fortunately, there is a great deal of ongoing research into hay fever, including research into new, effective treatments for hay fever. One recent treatment that is undergoing research is a nasal plug. Researchers in Australia believe this is a promising new way to prevent the miserable hay fever symptoms before they even start.

Another challenge involves mouth-breathing. For some people, putting something in their nose can make them breathe through their mouth. If pollen enters through the mouth, it can result in symptoms of irritation and burning, both of which can ultimately leave a reaction similar to that seen in people who suffer from asthma. Yet, the research into the new nasal plug is still overall very promising and positive. Researchers are also optimistic that the nasal plug could aid in relieving other types of allergies – not just hay fever.

Availability of the Pollen Filter for Hay Fever

Unfortunately, we are still a couple of years away from commercial availability of the nasal plug for hay fever, but by that time, we will at least know more about its effectiveness and use. For now, you should see your doctor about the best options for preventing and treating your hay fever. You can take measures now while looking forward to the availability of a nasal plug in the coming years.