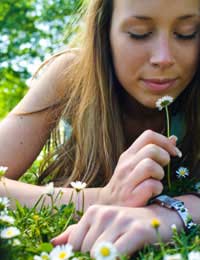 Most people don't seem to give much thought to their immune systems until they become ill. We rely on our immune systems to protect us from invaders. For allergy sufferers their struggle to handle symptoms can be even more daunting when they learn that their allergic symptoms are based on their body's immune response. It seems contradictory that your immune system-the part of your body that is meant to protect you from illness-is leaving you feeling miserable with sneezing, watery eyes, a runny nose and an itchy throat. It's important, however, to look at exactly what is occurring during a hay fever response, so that you can understand what is happening in your immune system.

What Exactly is an Allergy?

An allergy is your immune system's reaction to something that is normally considered harmless. This means that the substance is one that wouldn't usually cause a problem for most people. The substance that triggers the reaction is called an allergen and it can be any number of things-food, dust, drugs-or for those with hay fever, it's typically pollen.

You may be wondering why one person suffers from an allergy while others are fine. There are many ideas about why this happens but it's believed that there is a genetic aspect to allergy. If your parents suffered from hay fever, for example, you're more likely to develop it as well. There is another suggestion, which is that if a person is exposed to an allergen when their body's immune system is weakened-perhaps after a virus-they are more likely to develop an allergy.

What Happens to the Immune System in an Allergic Reaction?

We rely on our immune systems to protect us from invaders such as bacteria and viruses. Our immune systems comprise our defence system that shields us from the many pathogens and invaders present in our environments. An allergic reaction, however, operates on the premise that the normally harmless substance is actually an invader.

When a person who is exposed to pollen, for instance, comes into contact with that allergen, the person's body mistakenly believes the pollen is invading the body. In response, it mounts an attack on the invader by producing generous amounts of antibodies. In an allergic response to pollen, Immunoglobulin E (IgE) is produced. A person who doesn't have an allergy will only produce small amounts of IgE while an allergic person produces vast amounts in response to allergen exposure.

You may be wondering what the IgE does in the body? It joins to other cells, known as mast cells. When you're exposed to an allergen, the allergen attaches to the IgE, which then triggers the mast cells to produce chemicals called histamine, prostaglandins and leukotrienes. It is these chemicals that affect your body, causing the characteristic symptoms of hay fever that you likely know and dread-sneezing, itchiness, irritated throat, bloodshot eyes and a congested nose.

Histamine is the key chemical in the allergic response, causing swelling along with a narrowing of respiratory passages and increased production of phlegm and mucus. Your immune system has responded to what it considers a threat by waging an attack. It's a 'false alarm,' so to speak, but unfortunately, you suffer from the symptoms of hay fever in response.

Why Allergies can get Worse

People who struggle regularly with hay fever may have even considered moving to an area with fewer pollen-bearing plants. The problem is that a person who suffers from hay fever is likely to suffer from other allergies. Thus, you are more likely to develop an allergy to another plant. The best course of action is to limit exposure and treat with medications.

Allergies such as hay fever are frustrating for the sufferer, particularly given the mechanism behind it with regards to the immune system. It can feel like your own body is rebelling against you and hay fever sufferers may feel helpless to handle their hay fever symptoms. For many people, regular avoidance of the allergen combined with medication can really make a difference in preventing hay fever symptoms. Some people also find that allergies ease over time. Ultimately, there are options to handle your hay fever and by understanding your immune system, you can feel empowered to take action and obtain treatment.