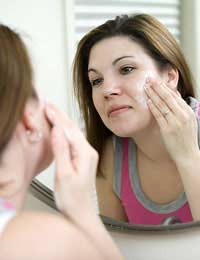 Understanding why hay fever occurs is one part of a difficult battle for hay fever sufferers. Although we do know a great deal about the immune system and how it reacts to an allergen, there is still much mystery surrounding the reasons for this reaction. Aspects such as genetics have been identified as contributing factors but researchers still want to understand precisely what causes the immune system in some people to essentially overreact to an allergen. New research, however, has suggested that skin inflammation can set the stage for hay fever in the future.

To understand how this newer research links to hay fever, it's important to first have a general sense of what occurs during a hay fever attack. For all of us, we rely on our immune systems to protect us from disease. Viruses, microbes and various other invaders are constantly around or on us; our immune system serves to identify invaders and then respond by eliminating them through various cells and systems that work cooperatively to keep us healthy. In allergy sufferers, however, the immune system responds inappropriately. Pollen, grass and many other normal and benign substances are viewed as foreign agents. The end result is that the immune system wages an attack on the harmless substance and produces various chemical mediators to protect the body. The main one of these is histamine, which leads to the characteristic redness, swelling, irritation, itching and congested nose that is often experienced during a hay fever reaction.

New research suggests that something as minor as a cut experienced by a child may prompt the beginnings of conditions such as hay fever. One reason for this is because hay fever involves chronic inflammation of various body tissues such as those lining the nose and throat. While current treatments have aimed to tackle the body's immune response to the allergen, researchers now believe that this is only one part off the battle. A study in the United States found that damage to the skin could result in the excessive production of a skin protein that is known as connexin 26. Yet, wouldn't everyone who suffers from a cut then end up with hay fever? This, however, isn't the case because the overproduction of the protein occurs in people who also have a defective form of the gene. In the average person, when the skin suffers from some sort of damage, this gene is turned on and it encourages the production of new skin cells. For normal individuals, the gene is turned off afterwards but for those with the defective gene, increased levels of the skin protein remain.

This excessive production of connexin 26 means that skin cells replicate at a very fast rate and thus, aren't able to divide and develop into fully functioning cells. The reduced quality of the cells prevents them from sending the correct chemical signals to turn off the gene and it also stops them from properly joining with neighbouring cells. Ultimately, the body's skin can't function as a proper barrier. Allergens are able to move through this poorly constructed barrier, where they react with the immune system and lead to an overly sensitive immune system.

Further research will hopefully yield ways to identify those with the defected gene and then develop ways to ensure the body responds appropriately to skin damage. The goal will be to prevent immune system hypersensitivity, which may eventually help to prevent hay fever from occurring.

Overview: Hay Fever Causes
Share Your Story, Join the Discussion or Seek Advice..
@Aqaulei. We really can't comment on specific cases but hope another of our readers might have similar experiences that they can tell you about. We recommend asking your GP for a second opinion, perhaps from an allergy specialist or dermatologist.
HayfeverExpert - 22-Apr-15 @ 2:39 PM
This article has really struck a chord with me. My 7 year old daughter consistently suffers every year starting in March or April, with a itchy rash on the very top of her bottom cheeks which eventually spreads to the very lower part of her back. This has been happening since she was 2 years old and she had chicken pox also at this time of year. It was a pretty bad case. Initially she was still in a nappy at night but I had to stop that quickly because the spots became infected and wouldn't heal. She was in a lot of discomfort and was permanently bare bottomed to try to get air to it, to aid healing. It took months and months to heal up, as she was itching constantly. I'd say we were well into autumn before it got better. And then every year since, as soon as the sun comes out around March or April, it flares up again. The poor thing is unable to stop herself from itching, it gets red and spotty, then sore then eventually will bleed. Our GP was useless saying it's not connected, and must be something she sat on that she's reacted to, or a change in laundry powder??!! But it's only on that part of her body, but also no other hay fever symptoms. I do have hay fever myself although not as bad now as when I was younger. However, I remember when I was around 7 years old, getting an itchy rash under my chin from carrying a hay bale, that got sore and wouldn't go away, long after the hay bale moment, and then the hay fever started after that. I'd get the same rash every year but along with all the other hay fever symptoms too. Could it be that my daughter and I have this same gene? I could do with some advice as she is getting scarring from it now. Could anti-histamine help?
Aqualei - 20-Apr-15 @ 12:56 PM
Title:
(never shown)
Firstname:
(never shown)
Surname:
(never shown)
Email:
(never shown)
Nickname:
(shown)
Comment:
Validate: